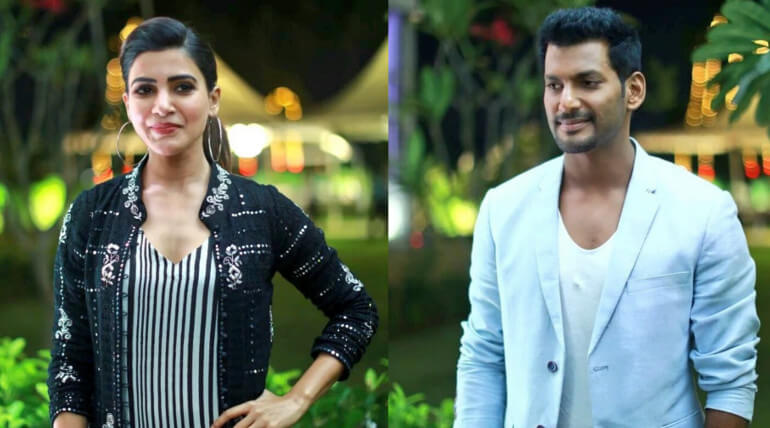 Vishal at the event revealed the audio launch of the film will take place at grand Natchathira Kalaivizha in Malaysia on Jan 6th. He talked several friends of him prayed I should not contest in RK Nagar election including director Mithran. The team had planned to release the movie on Pongal but it was pushed back to Jan 26th. The movie shooting will be completed today and enters post production works in full swing.

"Irumbu Thirai is going to be one of the important film in my career," Vishal added. He said it was his wish to be part of stylish film that connects with youngsters. He was excited that it happened now.

Samantha joined the set after 3 days of her marriage. While addressing the event she said "No body treated her differently after her marriage. There are lot of funs on set and I admired Vishal's energy on the set. I feel like Vishal is younger than me. Vishal had delivered his best performance, working on this film is wonderful and I am confident on the film."

Both lauded the cinematographer George C Williams' stylish visuals who had worked with Samantha in Theri and Kaththi.

Director PS Mithran said "It is four years of long journey from narrating the story to wrapping up the shoot today. The movie had witnessed 3 elections of Vishal. When I narrated the story to Vishal, he immediately agreed to do this project."

Ruben had edited the film and Yuvan Shankar Raja had tuned music. The audio will be launched at Malaysia on Jan 6th.