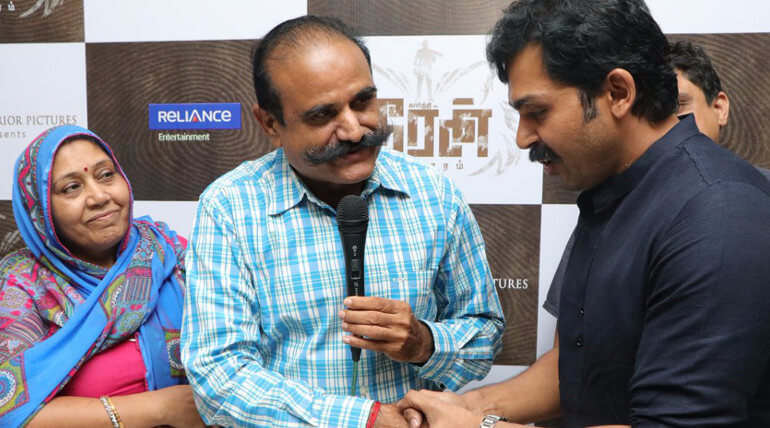 Theeran Adhigaaram Ondru, realistic cop story gets accolades from the real police officer SR Jangid who headed the Operation Bawaria. The team is lauded by DSP for their hard work and effort for visualizing the real story as it was.

DSP SR Jangid said "The incidents are well researched and delivered. They have used proper technical terms of the police department. The film had come out very well. Right from the first how the Bawaria operated was neatly picturized. How the team was shifted to UP and how we encounter them and all the incidents are mixed properly in the film.

The love story in the film is also true. The Thiruvallur DSP who got married 15 day back was with us in the operation. Everything is almost real. It is great to see the team had shot the film in real spot. I have to praise director Vinoth and Karthi. Commando training, Horse scenes resemble the Hindi Soley movie. The some of the aspects are so good and it is technically pure police aspects. I appreciate the whole team for their sincere effort. This film had honoured us. All police people really appreciate the film."

The movie receives great reviews from critics and fantastic response from audience too. Ghibran music perfectly fits the story. Karthi and Rakul Preet Singh are leads in it.

DGP S.R. Jangid sir, who actually headed the team in pursuit of Bawaria, says that #Theeran team has honored the Police Department. Thank you Sir for your kind words. We are honored to have you.#TheeranAdhigaaramOndru #TheeranPremiere pic.twitter.com/J1KiIBzaCT