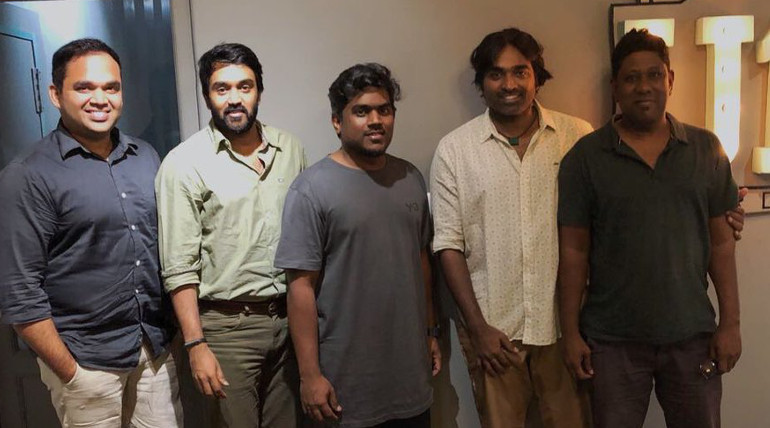 The one of the busiest Kollywood star Vijay Sethupathi turned as a singer for Yuvan Shankar Raja tuned for upcoming Pei Pasi movie directed by Shrinivas Kavinayam. He had crooned cool song for this film. Yuvan's cousin Hari Krishnan bhaskar will be introduced as a main lead in this film.

Yuvan Shankar Raja shared "Vijaysethubathy singing for the first time, a cool track for the movie #peipasi introducing my cousin Hari Krishnan bhaskar as the main lead, directed by @frenchvirgin watch out guys...!!!"

Vijay Sethupathi who has dozens of film in his kitty had already turned producer in Orange Mittai and Merkku Thodarchi Malai. He had also written script for Orange Mittai.

To be noted, Makkal Selvan had already sung some lines for the songs in Orange Mittai in Justin Prabhakaran music and also in 'Majja Malcha' song in Hello Naan Pei Pesuren tuned by Siddharth Vipin. The actor is in hot buzz that he will be locking horns opposite Rajinikanth in Karthik Subbaraj film.

Meantime, the actor is gearing up completing 96 movie and expected to join project with director Arunkumar and then to start Seenu Ramasamy's film. In between he will be joining Manirathnam's Chekka Chivandha Vaanam.