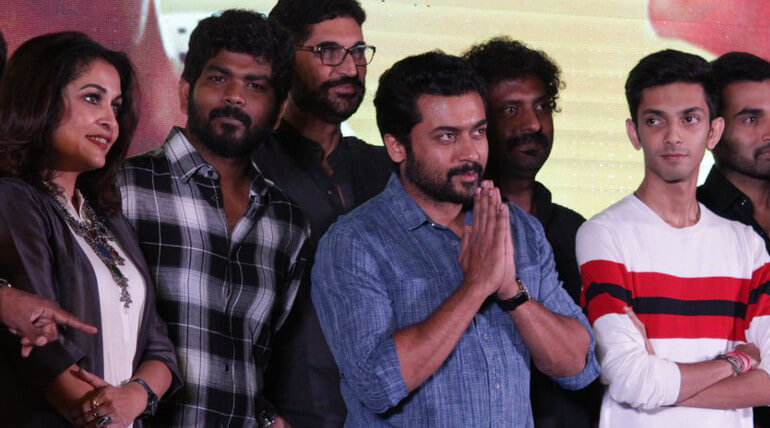 The production house Studio Green had conducted mega event at Green Park, Chennai today having 4 movies celebrations at the same event. Gnanavelraja of Studio Green is excited about Thaana Serndha Koottam success and the success meet is held as one of the events. Suriya, Ramyakrishnan, Anirudh, Vignesh Shivan and all the casts and crew members were present at the event.

Suriya at the event stated "It is an important film in his career though it is his 31st film. I do not want to miss the event and rushed here despite my other schedules. I got good reports from audience, media and critics. They said lot has been broken in this film from what I have done in my past four to five films.

Lots of people saying I have to do more films like this and the main reasons for this are Vignesh Shivan and Anirudh. Anirudh music had been crowd puller and crossed borders. I will not forget this experience and all the technicians and actors are very important who lifted the movie. Everybody passed lots of positive vibes when we are doing the film. IT has been 7 to 8 years my movie released for pongal. I got opportunity to see movie in theatres and had chance of seeing audience massive responses."

Meantime Studio Green's next project Ghajinikanth first single was released yesterday and the team were present for the press meet and also another movie Iruttu Araiyil Murattu Kuthu's second single and press meet was held.