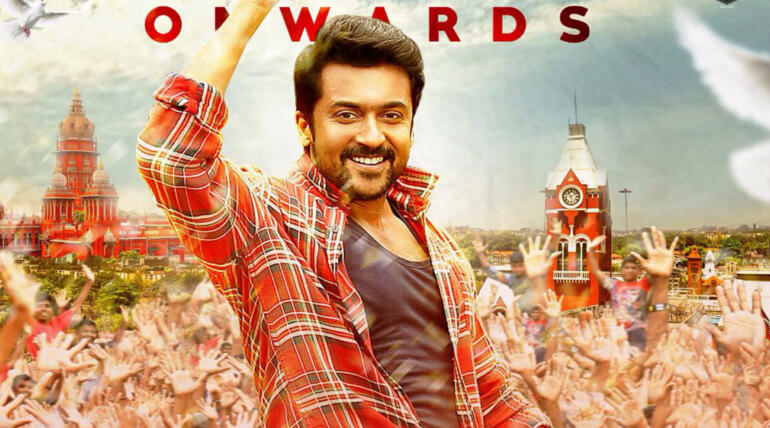 Suriya and Vignesh Shivn combo is set to rock on theatres worldwide from today. The movie has been released in maximum theatres in the state which was produced by Studio Green. There are several first time combinations for Suriya in this movie. Anirudh Ravichander had tuned first time for Suriya and his songs are massive hit.

Keerthy Suresh and Suriya chemistry onscreen is much awaited one by their fans. Meantime the movie has veteran actors Karthik, Ramya Krishnan and Senthil in pivotal roles while Kalaiarasan, Nandha, RJ Balaji, Sathyan and others are doing supporting roles.

The movie is released titled Gang' for Telugu audience. Suriya had dubbed his own voice in Telugu and even he said to regret if there is any Tamil shade in it. Hindi super hit Special 26 had been changed a lot to connect with Tamil and Telugu audience. The team had earlier said it is only the adaption of the content and not screen to screen remake of the original.

Here are some critics' reviews. The live audience report about the film will be updates here. Stay connected.

#TSK Interval: Very enjoyable. @VigneshShivN smartly converts #Special26 into a free-flowing, chilled out entertainer. @Suriya_offl turns back the clock and is a treat to watch!

#ThaanaaSerndhaKoottam is a great racy fun ride, packaged well & crisply told by @VigneshShivN. @Suriya_offl is fabulous along with the rest of the cons especially @meramyakrishnan . Wholesome family entertainer.

@VigneshShivN â€˜s interpretation adds a perspective! He has carefully incorporated the whole aspect of crime investigation going by the style of late 80â€™s! #ThaanaaSerndhaKoottam

Ripped off the action avatar, @VigneshShivN has decided to make a fun and comforting film with @Suriya_offl Sir!

#ThaanaaSerndhaKoottam : Damn impressed with the art direction team for recreating the 80s. Makes u nostalgic to see Gold Spot, and other retro stuff. 80s kids should surely watch the movie again to spot old favorite memorabilia.