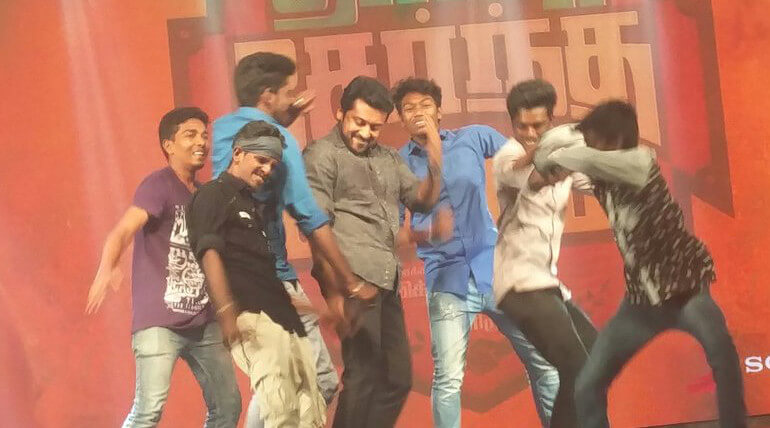 In Thaana Serndha Koottam event held yesterday, Suriya had surprised his fans who are touching his feet. When his fans bowed down to touch his feet he immediately without second thought he himself falls on fans' feet. By this action, Suriya requested his fans not to fall in his feet.

He also danced with his fans on the stage. These gestures of the top hero had surprised the entire audience at the event. The entire TSK casts and crew had attended the event at Kalaivanar Arangam yesterday. Vignesh Shivan, Senthil, Karthik, Anirudh, RJ Balaji and others attended this pre release promo event.

While addressing the event, Suriya said "If a person like me could become an actor, you guys can become anything that you want in life".

It is touted the movie will boldly talk about several societal issues. To be noted, the lyrics in the song already under controversies. The movie is slated for this Friday release worldwide. It is releasing in Telugu as Gang.

After the release of this movie, Suriya is to join with Selvaraghavan for yet to be titled project. He had also announced there is talks on for his upcoming projects with directors KV Anand and Sudha Kongara.

Suriya Reveals His Next Two Projects