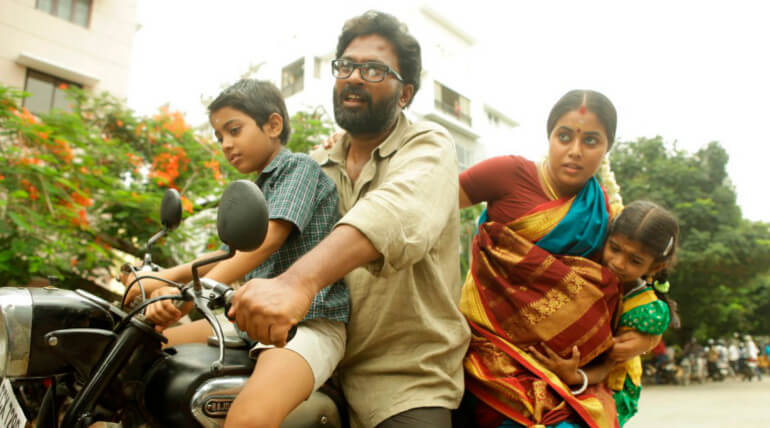 Mysskin acted and produced Savarakathi released today with great anticipations. As per expected, the movie had received great reviews from critics and celebrities from the special show yesterday. It is also getting good reports from live audience. Ram, Mysskin and Poorna featured in lead roles directed by G. R. Adithya.

It would be delight to see 2 unique directors and also great performers together in the big screen. The movie is touted to be hectic comedy drama which revolves in a single day.

Arrol Corelli music is one of the highlights in the movie that makes great impacts. After Pisasu and Thupparivaalan he united with Mysskin for the 3rd time.

Poorna is said to be in top form and the movie is reported to be a good fun rider. We can expect unexpected twists in the interval block. As a writer and actor Mysskin receives outstanding comments from the critics and celebrities. This dark comedy entertainer movie delivered a emotional punch that can't be misses says the audience.

Shanthanu, RK Suresh, Krithiga Udhayanidhi, and others shared their views on the movie through their twitter page. Here are some celebrities, critics and audience twitter reviews.

#Savarakathi a movie you shouldnâ€™t miss ! A perfect blend of laughter and emotions ! Unexpected screenplay and twists will keep you engaged ðŸ‘ŒðŸ‘ðŸ» brilliant performances from #Mysskin sir #Ram sir and @shamna_kasim ðŸ‘ŒðŸ‘ŒðŸ’›ðŸ‘ðŸ» do watch in theatres and support good films

#Savarakathi is that kind of a film where, youâ€™ll feel the style to be overpowering, but give it some time to grow on you, the whole funda works well!

#Savarakathi - Serious movie lovers and Myskkin / Ram fans - Not even a penny of you will be wasted. A lesson about how to make a budget movie . Will bring out all the best emotions in you. Go watch with a light heart, you will come out with a light but heavy one ! ðŸ‘ŒðŸ‘ŒðŸ‘Œ.

#Savarakathi 1st half - A wacky attempt where the comedy is very dramatic and physical. The characters are loud and over the top. Interval block is a nice clapworthy touch. Rowdy #Mysskin, barber #Ram driving the play..

First half of #Savarakathi over. Adhavadhu, ennoda karuththu ennanaa...
Haha, kidding. Will watch the film completely, and share review tomorrow, when the film's getting released.

Poetic, metaphorical and layered! Everything you want in a well structured film! #Mysskin connects randomness and unites the extremes! #Savarakathi also banks on absurd humour to improve interactivity!

#Savarakathi: A crime comedy that packs an emotional punch. The eccentricity of the characters makes the humor over the top at times but it does the job. More in my review.