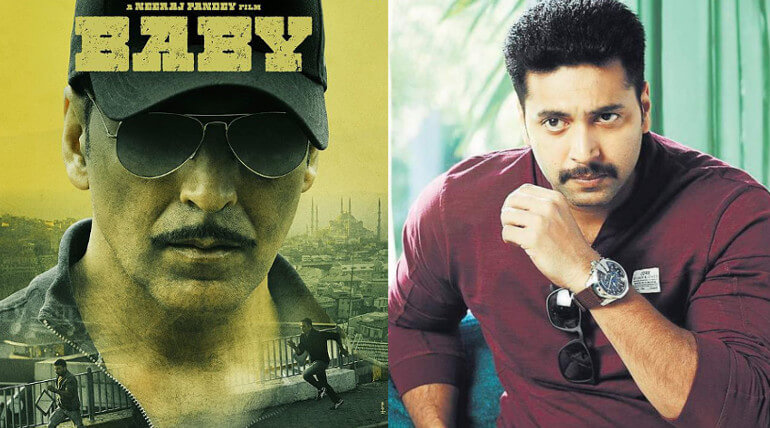 The story is about the secret agents named Baby whose job is to find the terrorists planning attacks in India. Akshay Kumar had received accolades from critics saying it was his career best performance.

The official confirmation regarding the Tamil remake of this movie is awaited. Meantime, Tik Tik Tik actor is looking forward for the India's first space thriller to hit theatres soon.

Ravi started his next titled Adanga  Maru with director Karthik Thangavel, As per the close sources, the first schedule of the film was completed and 2nd schedule has been started. Raashi Khanna had been signed to play the female lead while Sam CS of Vikram Vedha fame is scoring music.

After Adanga Maru, Ravi's 25th film will be with his brother Mohanraja who had directed Ravi in Thani Oruvan and several remakes before. Mohanraja's recent release Velaikkaran that stars Sivakarthikeyan had become blockbuster hit.

Ravi is also committed for Sundar C's historical magnum opus project Sangamithra that also has Arya and Disha Patani in main leads. Produced by Thenandal Studios, the makers planned to commence film on floor from May 2018.