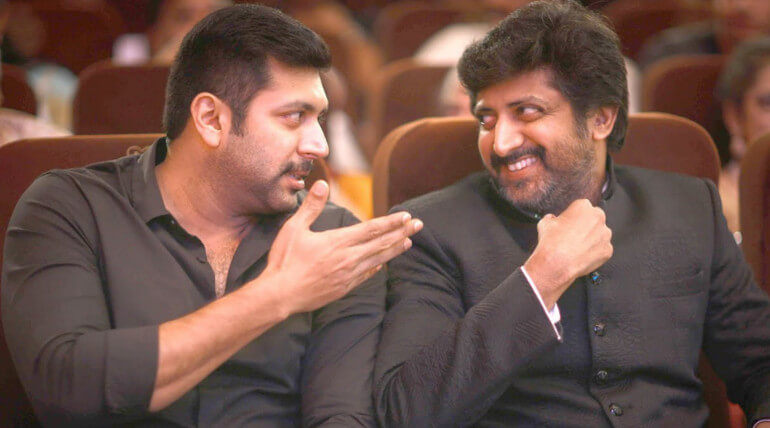 Jayam Ravi who is currently busy with his 24th movie Adanga Maru with director Karthik Thangavel had confirmed his next 25th film with his brother Mohanraja. The duo will be collaborating after the massive success of Thani Oruvan. Buzz, the movie may be the sequel of Thani Oruvan. Ravi said his brother had already started scripting for the project.

Mohanraja is happy about overwhelming responses of his recent release Velaikkaran with Sivakarthikeyan. There are also buzz about his collaboration with Thalapathy Vijay for his next. Raja shared selfie still with Vijay that was taken during their recent meeting. Vijay had praised his Velaikkaran and said to be proud of the movie.

'Romeo Juliet' star was also committed to Sundar C's magnum opus Sangamithra that was getting ready to take off from April this year. His ongoing Adanga Maru has Raashi Khaanna pairing with Ravi and Vikram Vedha fame Sam CS music. The shoot is on progress in full swing. The sources reveal its action sequences are taking place at night in Anna Nagar.

His space thriller Tik Tik Tik with Shakti Sounder Rajan is ready to hit theatres on Jan 26th. It is one of the most anticipated movies of the year which has Imman's music and Nivetha Pethuraj as female lead. The actor is very confident of this movie and excited about audience reaction for this new genre film in Kollywood. Ravi will be seen as the escape artist who goes to the space to complete the mission.