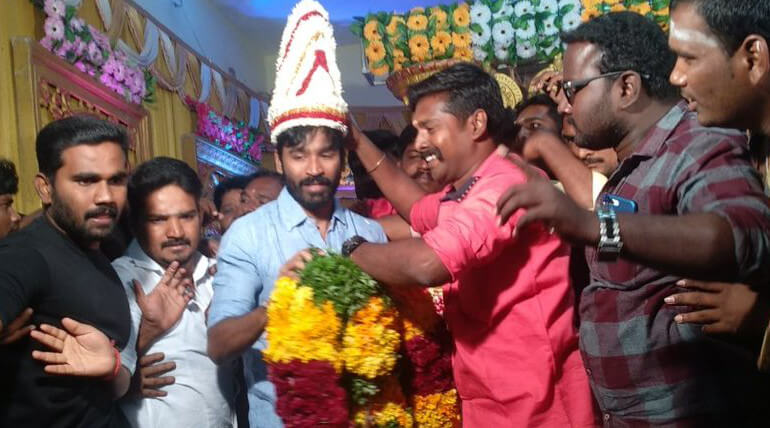 Dhanush had attended his fan's marriage function at Nellai despite his busy schedule of Maari 2. 'Kodi' actor had started 2015 super hit sequel Maari 2 with director Balaji Mohan. The first part had shown the new avatar of Dhanush as a cool area gangster. The unique style swag of the hero attracted the audience immensely along with mass background score of Anirudh.

Now as per the reports, Dhanush who never fails to encourage new talents is to introduce Kalakka Povadhu Yaaru fame Nisha in this film.

His Nellai fans are happy about his arrival and gave him the warm welcome. The photos with his fans are going viral on the net. Meantime, Maari 2 shooting spot stills were leaked on the net and been viral few hours before.

Maari 2 commenced on floor on Jan 21, the film is being canned at Tenkasi belt which made him easy to attend his fan's marraige.

Sai Pallavi is pairing with Dhanush in this project while Varalaxmi Sarathkumar and Krishna are doing crucial roles in it.

Yuvan Shankar Raja is onboard for scoring music instead of Anirudh who rocked in first part. Yuvan and Dhanush combo had worked out in several movies. They are teaming up after super hit songs of Yaaradi Nee Mohini.


Dhanush In Between Maari 2 Busy Schedule Attends His Fan Marriage