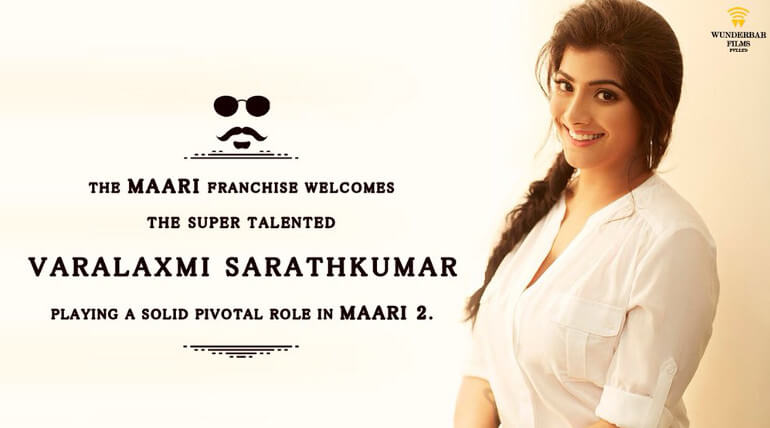 Varalaxmi Sarathkumar is on board for Dhanush's 2015 hit sequel Maari 2 to play an important role. The movie has Sai Pallavi as the female lead pairing with Dhanush. Krishna is set to play a second lead in it while Tovino Thomas is roped to play the villain for Maari 2.

Director Balaji Mohan shared "The super talented @varusarath is on board #Maari2 for a pivotal role completing the casting ensemble!  Exciting to see all the characters I put on paper turning into casting".

Yuvan Shankar Raja is onboard to score music for this sequel. The first instalment had Anirudh music that is still rocking in all parts of the state even now. Dhanush and Yuvan are set to team up after 10 years of super hit songs of 'Yaaradi Nee Mohini'. The combo had given the chart buster hits in several films Thulluvadho Ilamai, Kaadhal Kondein, Pudhukottaiyilirundhu Saravanan and Pudhupettai.

The selection of casts and crew are completed. The team is ready to go on floor from January first week. Meantime Dhanush is set to direct his second project after completing this film. He is collaborating with Sri Thenandal Studios and likely to start rolling from August 2018.

Dhanush had completed the trilogy Vada Chennai with Vetrimaaran playing the role of gangster. As an actor he had teamed up Vetrimaaran after super hit Polladavan and Adukalam. He had produced Vetrimaaran's Visaranai.

On the other hand, Varalaxmi had signed for Vishal's Sandakozhi 2 to do a negative shade role. She is also busy with Echcharikkai, Mr. Chandramouli, Ammayi, Kadhal Mannan and others. Her recent Malayalam film Master Piece with Mammootty is going well at box-office.