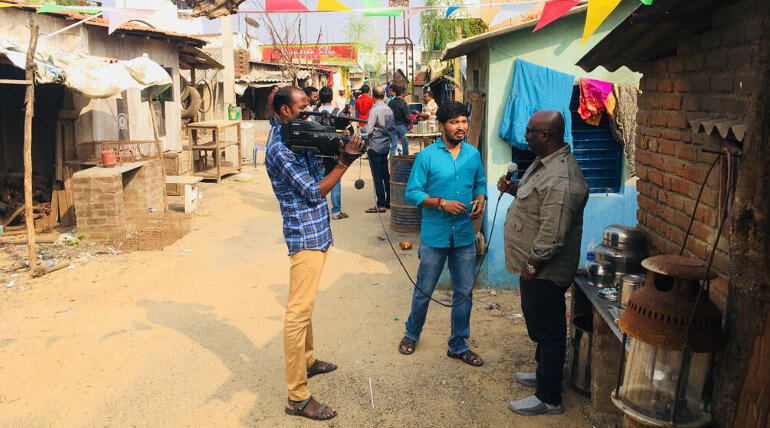 Velaikkaran's grand slum set Kasikuppam visit for Media is happening now. The producer has also planned to showcase the set for film students, fans and public in future. 24 AM Studios had released some pictures of media visiting the set.

The movie revolves around the slum area 'Kolakara Kuppam' that is controlled by the gangster Kasi (Prakash Raj). Hero Arivu (Sivakarthikeyan) wants to bring back the youngsters of the kuppam who are under mercy less killer Kasi.

The movie shows the hurdles of Arivu against gangster Kasi who is murdering the people directly for money. Arivu also fights against the dreadful antagonist Aadhi (Fahadh Faasil), the owner of FMCG Company who indirectly kills several lakh of children.

This slum area plays the key part in the film and was constructed by the art director T. Muthuraj for about 45 days. The set seems to be so realistic that was created in 7 and half acres. The slum buildings were constructed nearly in 3 to 4 acres. A part of bridge was also constructed where we can see the train travels on bridge in the film.

Most part of the film was canned in this slum set and been the soul of the movie. Nayanthara pairs with Siva in this social content based drama. Mohanraja directed and again received good name for his unique script and presentation of the movie. Rohini, Charlie, Sneha, Robo Shankar, Sathish, RJ Balaji and others are part of the film.

#VelaikkaranSetVisit for Media has started!