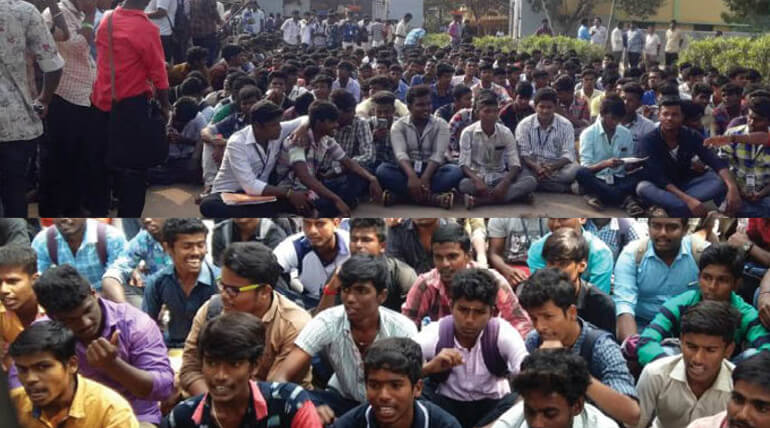 Following the sudden bus fare hike of Tamil Nadu government, huge protest started everywhere across the state. People are not ready to accept the hike of bus fare. Along with the students, common people are also involved in protest demanding the revision of the hike. Now, Chennai Law College students jumped in to the protest from today.

Edappadi government had suddenly increased 60 percent of the bus fare from Jan 20th across the state. People are anger and severely condemned the government, but govt is releasing the statements justifying the hike. They are saying the "Though the bus fare is increased, it is lower compared to other states".

It also points out losses and several issues faced by transport for the bus fare hike. The various section of people condemns against it. Several politicians, social organizations and students showed their strong condemns against the hike.

Chennai Ambedkar Law college students today had surrounded Broadway Bus Stand and making road strike. Some students also tried to surround Edappadi Palanisamy's residence and it was cleared by police by arresting them.

The entire Tamil Nadu is witnessing a hot situation and severe protest against this bus ticket rate increase that leads to suffering of many people.

Meanwhile, Kamal Haasan had conveyed his opinion over the bus ticket hike on his twitter handle. He said "it shows how the government tactics of taking decision and asking the opinion after taking decision. If they are working for the people, they would have taken alternative solution by consulting various experts on the government job itself".