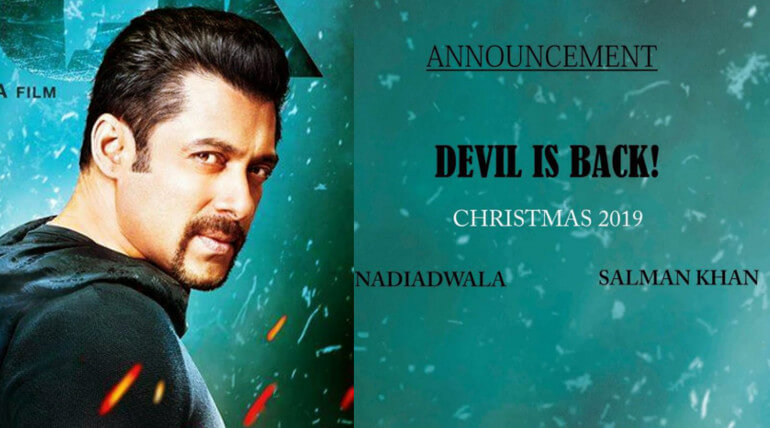 Director Sajid Nadiadwala who made his debut in block buster Kick in 2014 that featured Salman Khan is back with this sequel Kick 2. He was a debut director to enter Rs 400 cr club. The duo is reuniting again for Kick 2 and he blocked Christmas 2019 dates for release.

The announcement of the film was made today with the tag line 'Devil Is Back'. Hope the team will come up with developments soon. The movie is set to commence on floor early next year. The project will be bankrolled by Sajid Nadiawala under the banner Nadiadwala Grandson Entertainment who directed and produced the first part also.

The Bollywood star has another movie for release in 2019. It is a patriotic action movie Bharat being directed by Ali Abbas Zafar and planned for Eid 2019. His latest release Tiger Zinda Hai was well acclaimed and also become block buster by earning over Rs 500 crore at box-office. His Race 3 with director Remo D'Souza is being filmed where Salman Khan is bankrolling the film and slated for Eid 2018 May 4 release.

The first instalment Kick had Jacqueline Fernandez and Randeep Hooda in lead roles while Nawazuddin Siddiqui portrayed as antagonist. It was the official remake of 2009 Telugu movie Kick that featured Ravi Teja in lead, directed by Surender Reddy and story written by Vakkantham Vamsi. It was also remade in Tamil titled 'Thilalangadi' in 2010.