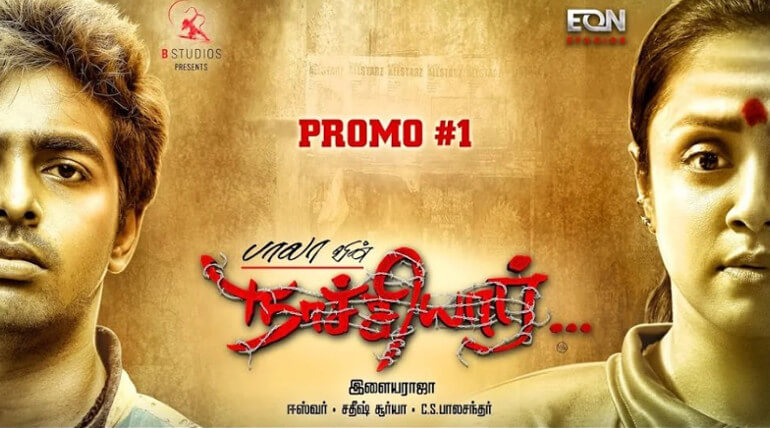 Naachiyaar team had started promoting the movie by releasing the promo teaser. The first promo video was unveiled by the team few hours before. The promo looks promising and interesting like the trailer.

The promo also has controversial dialogue at the end like the earlier teaser. Now Jyotika as a cop speaks "whether it is a temple or it is a dump yard it is equal to us". The team had dare enough to release this promo even after facing several controversies and cases for the Jyo's foul language in the first teaser.

The promo shows the young slum area lovers meeting in 3 different situation in temple, mosque and traveling along with nuns in an share auto. It also plays 3 songs representing Hindu, Christian and Muslim God.

Directed by Bala, the movie is slated as Feb 16 release while it is to hit theatres in UAE on Feb 15th. Maestro  Ilaiyaraja's background score is highly expected in this film that is produced by Bala under the banner B Studios.

Jyo will be essaying tough cop while GV Prakash is seen in new look like slum area boy sporting brown hair as a Fruit seller Kaathu. The movie marks Jyo's 3rd movie after her comeback.