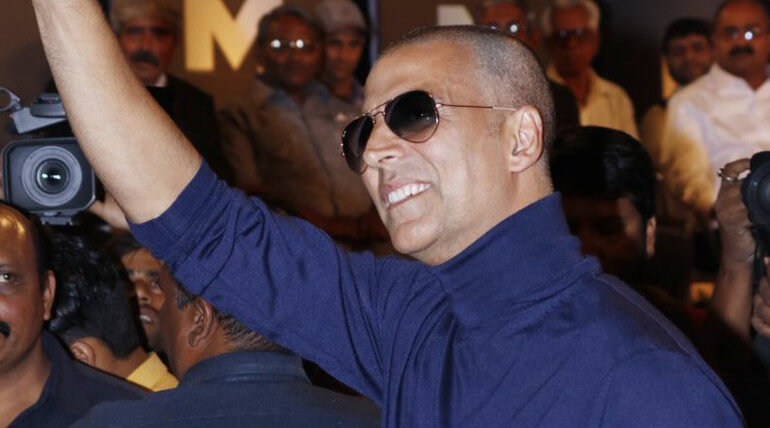 2 Point 0, the mega budget sci-fic thriller that was set for April 2016 release worldwide is gearing up its post production and VFX works. Shankar's magnum opus 2.0 produced by Lyca Productions feature Rajinikanth and Akshay Kumar in main roles while Amy Jackson will be seen as female lead.

Bollywood star Akshay Kumar who does not stop experimental films like Toilet has now in promotion of Pad Man movie which is slated for 25th Jan. The movie that was based on the real life incident of a social entrepreneur lives in Coimbatore, Tamil Nadu.

Producer Twinkle Khanna is to speak about Pad Man at Oxford Union and it is the first Indian movie to showcase in Oxford. Directed by R Balki, the movie has Sonam Kapoor, Radhika Apte, Sudhir Pandey, Maya Alagh and Amitabh Bachchan as cameo. PC Sreeram handled camera and music tuned by Amit Trivedi for this project inspired from the life of Arunachalam Muruganantham (real PadMan).

Meanwhile in an event, Akshay Kumar had shared his experience while working on 2.0. He said "Me and the entire team were awestruck while Rajinikanth brushed some dirt off his pants. He is the only one in the industry who has got swag."

He also opened about his role in 2 point 0. He said he got the role in the India's costliest film that he had never imagined.

Jolly LLB actor is now spotted in bald head in an event. According to the recent sources, the actor had completed shaved his  head for his new project Kesari which is the historic battle of Saragarhi on 1897  He had promoted Pad Man in grand finale of Bigg Boss season 11.