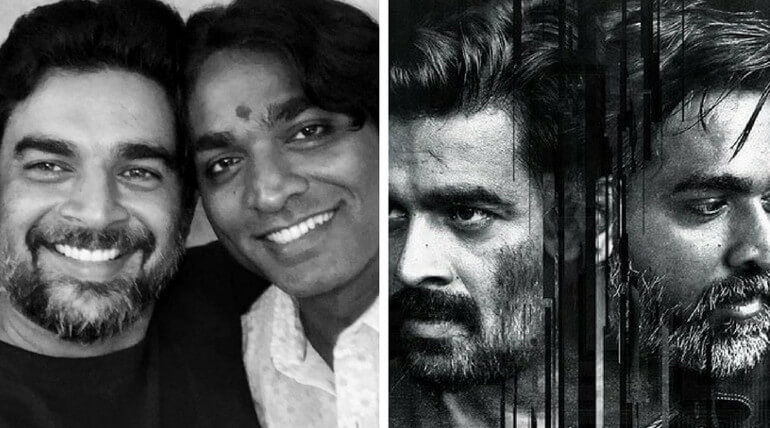 Vikram Vedha team had celebrated 100 days of success in an event yesterday. Directed by Pushkar - Gayathrie duo and produced by Y Not Studios the movie featured Vijay Sethupathi, Madhavan, ‎Shraddha Srinath and Varalakshmi in lead roles. Madhavan and Sethupathi selfie at the event is going viral on the net.

Vijay Sethupathi had been spotted with new look that he portrays for his upcoming movie. In this event, star spoke "Through this movie I have gained several friends and love from various people. There is nothing more to tell about this movie. We have already spoken at various events regarding this. I have one to say that this movie will have an important page in my life history. I will always remember this movie as a sweet memory and it has taken me to another level."

Madhavan had addressed great speech with the fun touch "I had confidence that I will speak in the 100 days event of the film. Pushkar and Gayathrie are the key reasons for the success because they took my suggestions. The movie had reached 100 days because they did not take my suggestion in various places.

I really want to thank media and critics because no one revealed the suspense climax which was the essence of the film. I have gone through several reviews after the film release, but the media was genuine in reviewing. Nobody revealed the suspense and villain of the movie. I have moved by their reviews and learnt a lot from this film."