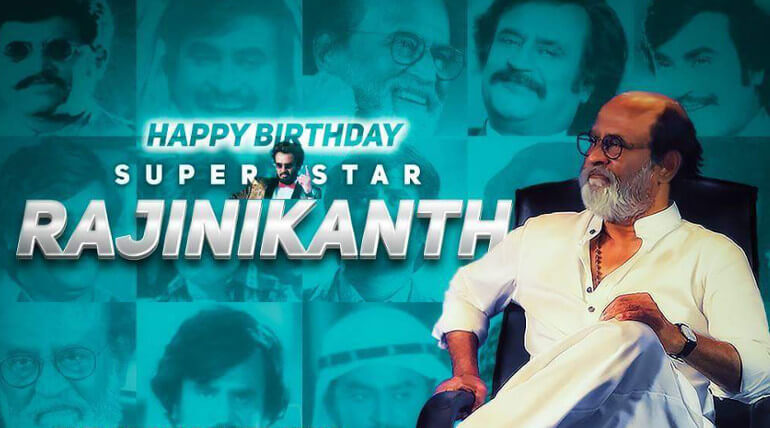 On occasion of Rajinikanth 67th birthday his fans are crowded in front of his house to see him since morning. He is expected to arrive soon to make his fans happy. Meantime the superstar is showering with wishes from fans, friends, political leaders, and celebrities across the country. The Cricket legend Sachin Tendulkar wished film legend on his birthday. Right from complete actor Mohanlal to Telugu young superstar Mahesh Babu, several celebrities are wishing him.

#HBDSuperStarRajinikanth tag is trending on the twitter page since early morning. His son-in-law multifaceted Dhanush had released his upcoming film Kaala's second look and that was also trended.

Rajinikanth's political entry is much awaited by his fans but still the superstar is not talking about it. His close sources are saying the time had not come still. The actor's Kaala and 2 Point 0 are gearing up for release next year. 2 Point 0, produced by Lyca and directed by Shankar is slated for April 2018 while Kaala directed by Pa Ranjith and produced by Dhanush is said to be released after 2 Point 0.

Here are some celebrities wishing tweets.

Happy birthday, @superstarrajini ji. May you have all the health and happiness in the world. Best wishes for your 67th. pic.twitter.com/a4cC0uVOWM

Wishing a very happy birthday to the one and only #Superstar @superstarrajini sir ðŸ’#HBDSuperStarRajinikanth pic.twitter.com/XGksBVKkIP

To my dearest uncle who taught me what humility is! May your grace and grandeur always fall like a shadow upon us. Here's to the most amazing and humble human being I have ever met. Happy birthday @superstarrajini â¤ #HBDSuperStarRajinikanth Waiting for #Kaala!

Happy birthday to the superstar of all time! A legend and a great humanitarian. Wishing you a long life with good health and happiness sir! ðŸŽ‚ðŸ™#Thalaiva #HBDSuperStarRajinikanth