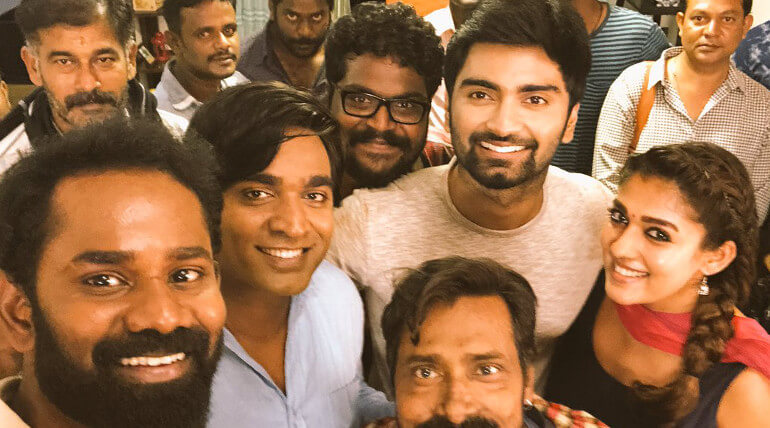 Atharvaa Murali, Vijay Sethupathi and Nayanthara featuring crime thriller Imaikkaa Nodigal has been wrapped up yesterday. 'Eetti' star had shared this on his twitter handle with the still of their team.

"With that it’s a wrap for Team #ImaikkaaNodigal . Been one crazy ride & Good fun working with this cool bunch !

Time to say Tata bye bye here and report to Duty as a Cop from tomorrow for @samanton21," Atharvaa Murali posted.

'Paradesi' performer is starting his next with director Sam Anton from today where he essays role of cop for the first time. Hansika Motwani is roped to pair with Atharva in this cop action flick.

Ajay Gnanamuthu of  Demonte Colony fame had directed Imaikkaa Nodigal. It has Raashi Khanna as one of the female leads while Anuraj Kshyap as Rudra dons the roll of antagonist. Produced by CJ Jayakumar under Cameo Films India and Hiphop Tamizha had scored music.

The first look and teaser received the smashing responses from audience. The music and thriller moments of teaser raised the curiosity level. The trailer and audio release dates are expected at the earliest.