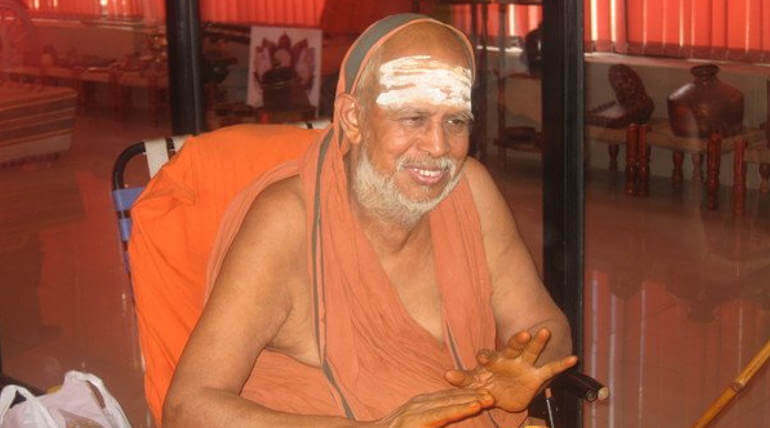 Jayendra Saraswathi Swamigal aged 82 due to cardiac arrest had died in private hospital at Kancheepuram today. He was suffered from illness in recent days, he had drowned last month and admitted in Chennai hospital. He was discharged after his condition became normal. As per the reports, the swamigal had diabetes.

He was the 69th Guru and head of Sankaracharaya Kanchi Kamakoti Peetham. He was the head in the mutt between 18 July 1935 and 28 Feb 2018. His orginal name was Subramanyam Mahadeva and was the successor of Chandrashekarendra Saraswati swamigal. His predecessor Vijayendra Saraswati swamigal was recently trolled for not standing for Tamil Thai Valzthu.

Jeyendra was arrested in 11th Nov 2004 for the case of murdering the manager of Kanchi Varadaraja Perumal temple. Nine years later, the case was favour of him and cleared charges on 22 others also. On January this year, a petition was filed in Chennai High Court to reprobate Sankararaman murder case who has been manager of Kanchi Varadharaja Perumal temple.

Jayendra had enjoyed the rapport of several higher officials and politicians in his life. Several politicians including Vice President of India, Arun jaitley, Mamata Banerjee, Congress party and others are conveying condolences to the swamigal death on their social media pages.