Budget 2018 some important expenditures of FY18 and FY19 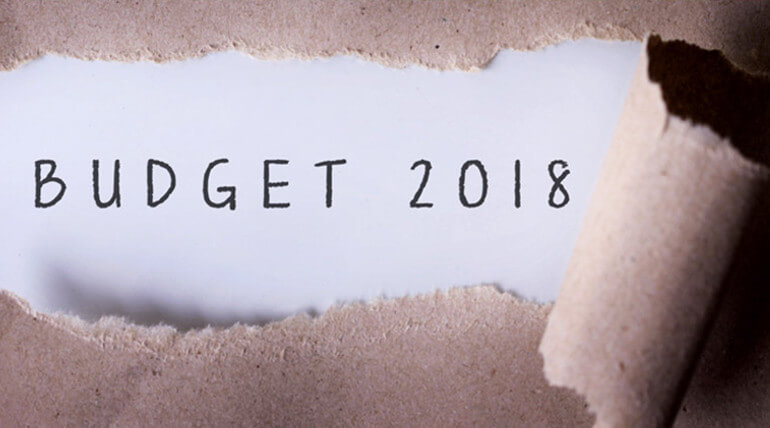 Budget 2018 some important expenditures of FY18 and Fy19

The budget concentrated over poor and corporate but failed to recognize a genuine tax payers.

The most expected Union Budget for the fiscal year 2018-19 had been proposed by Finance Minister, Arun Jaitley on February 1, 2018. Before starting the budget proposal Prime Minister, Modi had given a hint that the budget will bring a great modification in agriculture sector, corporate sector, technology sector and health sector. As same as he said here are some most important budget allocations proposed by the finance minister.

The deduction for salaried employees was margined as Rs. 40,000 instead of transport and medical allowance.

There is a 25% deduction in corporate tax for the corporate companies who have income up to Rs.250 crores.

There will be an extra concentration over the domestic production of defense equipments in the fiscal year.

Rs. 1.48 lakh crores have been sanctioned to the railway department.

Track maintainability will be considered as a first preference.

Safety measures in the railway department.

4,257 unmanned level crossings will be evacuated.

Rs. 70,000 had been sanctioned for the Mumbai's suburban rail link.

Every above process will be done with in next fiscal year before the upcoming election.

Rs. 14.34 lakh crore will be spent over the development of rural infrastructure.

A good move through this budget is the medical reimbursement up to Rs. 5 lakh per family under the National health protection scheme which cover the health insurances of almost 50 crore people.

Rs. 7,148 crore had been provided for the textile industries for boosting up the production in the year 2018-19.

Rs. 50,000 had been raised in the medical insurance premium of senior citizens and it will be hiked up to Rs. 1 lakh under critical situation.

Rs. 10,000 crore had been proposed for funding fisheries, agriculture and animal husbandry.

Customs duty for smartwatches, Mobile Phones has been increased to 20%. It will show a concerned hike in their prize.

Airport capacities will be hiked to manage about 1 billon trips in a year.

Government had hopped to eliminate cryptocurrency as soon as possible.

Rs. 5 lakh and Rs. 4 lakh had been allocated as salary for the President of India and Vice President. Rs. 3.5 lakh for governors.

The central had filled with Rs. 90,000 crores as tax this year due the increased number of tax payers. After the demonetization and  GST implement the central had profited with this much but refused to increase the margin of personal income tax.

Is the above budget proposal benefits the salaried employees of middle class? Will there be a better luck in next budget session?

Budget 2018 some important expenditures of FY18 and FY19