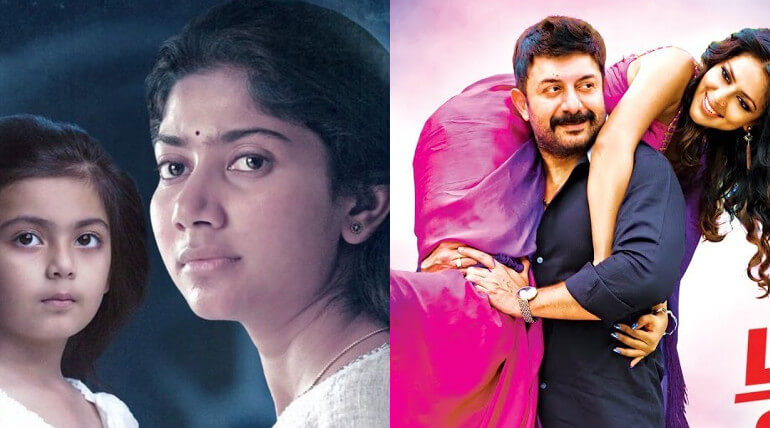 Two important Tamil movies this year are pushed back by the makers due to unknown reasons. Sai Pallavi's debut Tamil movie Karu directed by AL Vijay had slated for Feb 9. Produced by Lyca Productions, the movie was postponed to Feb 23 and the reason for this is not revealed by makers. Sai Pallavi's fans are deadly waiting for her Tamil debut and they are quite worried about the push back.

Vikram Vedha fame Sam CS had score music for his horror thriller and his music is on the way. Sai Pallavi had signed other Tamil movies with biggies Suriya and Dhanush projects.

Meantime, it is bad news for Arvind Swamy and Amala Paul fans. Their movie Bhaskar Oru Rascal which was slated as Jan 25th release is pushed back to unknown date.

It is the remake of Malayalam super hit movie 'Bhaskar The Rascal' that featured Mammootty and Nayanthara in lead. Siddique, who had written and directed the original is helming the remake project. It has 'Theri' fame Baby Nainika and 'Sethupathi' fame Master Raghavan in key roles.

It is reported the makers of these movies had changed the release dates due to overcrowded release from Jan 26 to Feb 9. Several movies are set for release in this week end on Jan 26th including Vijay Sethupathi's Oru Nalla Naal Paathu  Solren, Priyadharsan directed Nimir, Vemal starring Mannar Vagaiyara, Anushka's Bhaagamathie and Deepika Padukone starring Padmaavat.