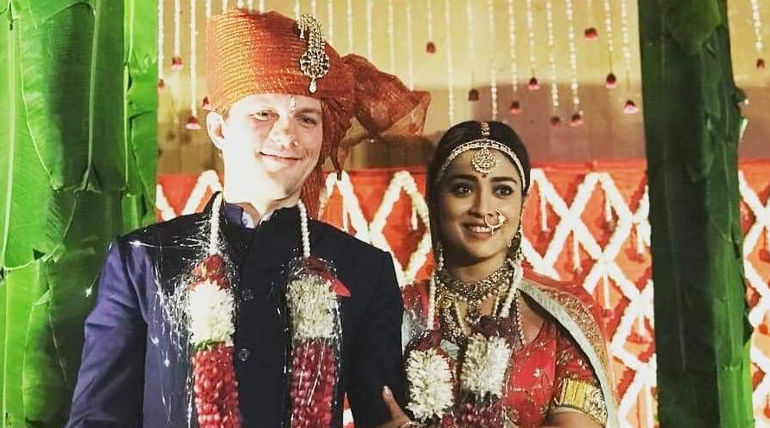 After a huge success of the 2007 Tamil blockbuster “Shivaji”, in which the actress played a heroine role, Shriya Saran became popular in all South Indian cine industries. She acted in a 2015 hit Hindi film “Drishyam” with Ajay Devan and a debuted in a Hollywood movie “The Other End of the Line” earlier but the movie received negative reviews, unfortunately.

Her last movie “Gayathri” was released in February 2018. Director Madhan had directed the movie in Telugu.

Already there had been a gossip about Shriya’s boyfriend and also, her boyfriend photos were seen often in social media. Confirming the relationship between Shriya and Andrei, they tied knots on March 19, 2018, in Udaipur in Rajasthan.  It was actually a secret ceremony and only a few of her family and close friends have been called for the wedding.

The actress' marriage photos have become viral now in social media and she was seen in full bridal attire which is red in colour along with Andrei who was in deep blue attire. As a highlight of the ceremony, it is said that the groom had recited a Hindi song to the gorgeous bride.

The actress’ fans had much awaited for an official announcement from Shriya Saran but it is definitely a surprise for them.Shriya saran’s are anticipating that whether the actress would act in films after marriage.