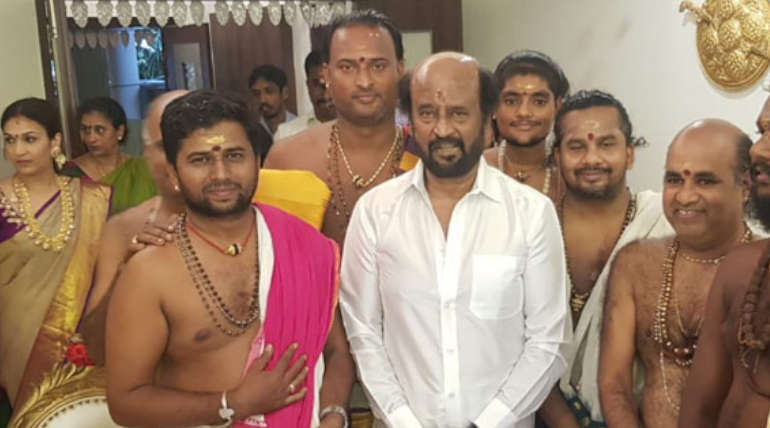 The mystery behind Superstar Rajinikanth's Bhimaratha Shanthi Yagam at Poes Garden, Chennai: Rajinikanth, the superstar of Tamil cinema, held a pooja at his Poes Garden House in Chennai yesterday by inviting only his close relatives and personalities of the family. The question has arisen not only among fans and political circles in Tamilnadu regarding the Bheemaratha Shanthi Pooja conducted last night, twirling the mysteries to be for the political achievement. The main benefits of the pooja are to attain unhindered activities and weakening opponents.

After meeting his fans in every district and appointed executives in the fan club, in 2017, Superstar Rajinikanth announced the political entry. But thereafter, Rajini was busy with his movies and career. Succeeding the blockbuster hits in Shankar's 2.0 and Karthik Subbaraj's Petta, Superstar is working at a full swing in A.R.Murugadoss directorial drama Darbar to hit the silver screens during Pongal celebration.

Recently Kamal Haasan 60 celebration befell gloriously as "Ungal Naan," and many dignified celebrities attended the function to honor Ulaganayagan. When there is anything for Kamal, Superstar Rajinikanth is the one to shoulder him preeminently. At the Ungal Naan podium, Rajinikanth opened about his wholehearted will to join Kamal's Makkal Needhi Maiam without any regret only for the goodness of Tamil people.

Meanwhile, yesterday, Rajini performed a pooja called Bhimarata Shanti Yagam at his Poes Garden residence. When fans are in huge expectations for the initiation of the party, they clarified some priests about the Pooja, stating that "Bhimarata Shanthi is a special pooja that is performed by a man at the age of 69 to relish a long healthy life after the age of 70.

Bhimaratha Pooja is usually practiced in religious places or temples where life is developed, and a faith to create goodness is believed in home poojas.

Besides all Rajini's brother, Satyanarayana Rao conducted a Shanti Pooja a few months back at Chidambaram Natarajar temple and wished Rajini wants to win the upcoming assembly elections in 2021.

Anirudh Ravichander's musical starring Rajinikanth song "Chumma Kizhi "is already tearing up the playlist creating extreme fan expectations for Darbar from last week. Subsequently, Superstar has become the tittle-tattle of this week, too, with the wellness Pooja done at his home with the close members of the family.