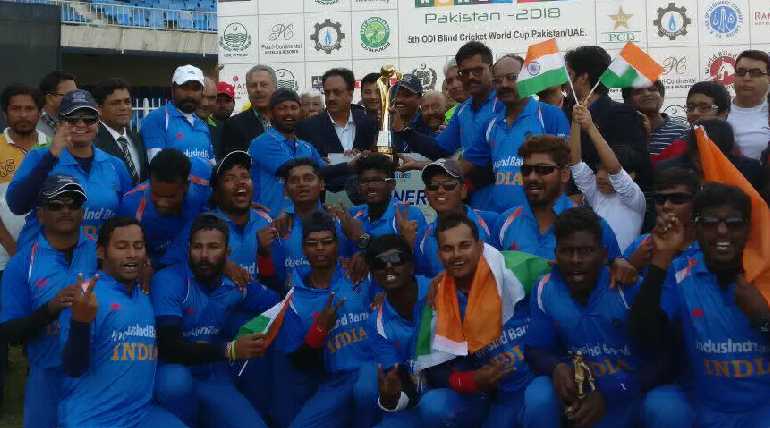 The team had won world cup by beating Pakistan by 2 wickets. It is the fantastic win by India over Pak in the final match held today. It is a thrilling match for India to retain the title. It is India's 2nd time in winning the title.

Indian captain Ajay Kumar had received trophy and prize money. The match was held in Sarjaj on Saturday after India winning Bangladesh by 7 wickets on Wednesday in the semi-final.

After India won toss, it opted for bowl first and Pakistan scored 308/8. The team is receiving wishes and appreciation across the country. Sport celebrities, film personalities and people are pouring wishes on the social media page for the great victory of the team.

Prime Minister Narendra Modi congratulated the team on the twitter handle stating "Congratulations to our cricket team for winning the 2018 Blind Cricket World Cup! They make the nation proud and inspire every Indian with their game as well as phenomenal attitude. True champions!"

Congratulations Bhaaiyon. So very proud of you for winning the finals again and beating Pakistan. May you continue to shine and light our hopes. #BlindCricketWorldCup pic.twitter.com/32sATClb1k