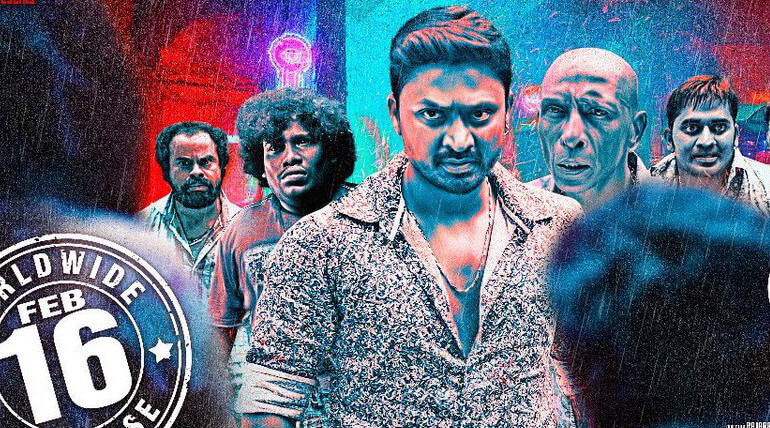 Krishna starring Veera official release date was announced by the team today. Directed by Rajaraman and written by Bakkiyam Shankar, the movie is slated for Feb 16th release. It is releasing along with Bala directed Naachiyaar that has Jyotika and GV Prakash in main roles.

The long delayed film had finally got the release date after facing several hurdles. The movie has the comedy gang Karunakaran, Rajendran and Yogi Babu. It seems the movie is has the full fun package gangsters.

Elred Kumar of RS Infotainment had produced the film. Kannada actress Iswarya Menon is debuting in Tamil as a female lead. She had acted 'Theeya Velai Seiyyanum Kumaru' as a friend of Sanjana. The movie also has Thambi Ramaiah, Chanrandeep, Aadukalam Naren, Radha Ravi and others.

Leon James, who tuned for 2 songs of Kanchana 2, Ko2 and Kavalai Vendam had composed music for this film. Kumaran-Vignesh duo had handled camera while edited by T. S. Suresh.

The movie has the title of superstar Rajinikanth super hit 1994 movie Veera directed by Suresh Krishna featuring Meena and Roja in female lead.

Krishna was last seen in supernatural dark crime thriller Graghanam directed by Elan that wa released in Dec 2017. Last year 5 movies of his had been released including Yaakkai, Pandigi, Graghanam, Nibunan and Vizhithiru.