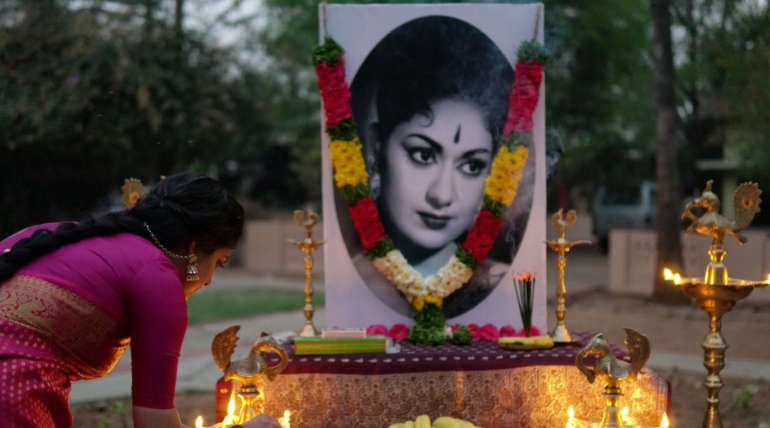 Keerthy Suresh ‘s trilingual film “Nadigaiyar Thilagam” is one of the anticipated female-centric films in South Indian Cinema Industry.  The movie will be released in the name of “Mahanti” in Telugu. With Dulquer Salmaan playing the role of the late actor Gemini Ganesan and Keerthi Suresh acting as Savitri, Samantha Akkineni and Vijay Devarakonda were also roped into the film in a crucial role.

Asked about Samantha’s role in the film which many would feel as unnecessary one, the filmmakers replied that she has played the Madhuravani character and without her, the film would be incomplete.

Directed by Nag Ashwin, the music has been composed by Mickey J Meyer. Nag Ashwin had asked Keerthy Suresh to put on weight for the movie.

Nag Ashwin had said that he got inspired by the life of Savitri who was considered as the first female superstar in Tamil and Telugu and highlighted the quote, “Her Life itself is a story”. As a promo for the movie, a black and white look of Dulquer-Keerthy Suresh has been revealed by the production crew and the look portrays exactly the real life and reel life pair of Gemini Ganesan-Savitri. It has become the talk of South Indian Cinema Industry recently. Previously, the film's first look featuring both the actresses was released on March 8 in connection with International Women's Day. The shooting for the movie which began on May 2017 has come to an end and is expected to toll on Tamil, Telugu and Malayalam theatre screens by May 2018, announced by the production team on March 22, 2018. Interestingly, the fabulous actor Gemini Ganesan’s death anniversary falls on March 22 only. Initially, Director Nag Ashwin considered Tamil actors Surya and Madhavan for Gemini Ganesan’ s role. But, finally, he ended up with the actor Dulquer Salmaan, who is the son of Malayalam Superstar Mammootty.

Keerthy Suresh Dubs Her Own Voice For Telugu First Time