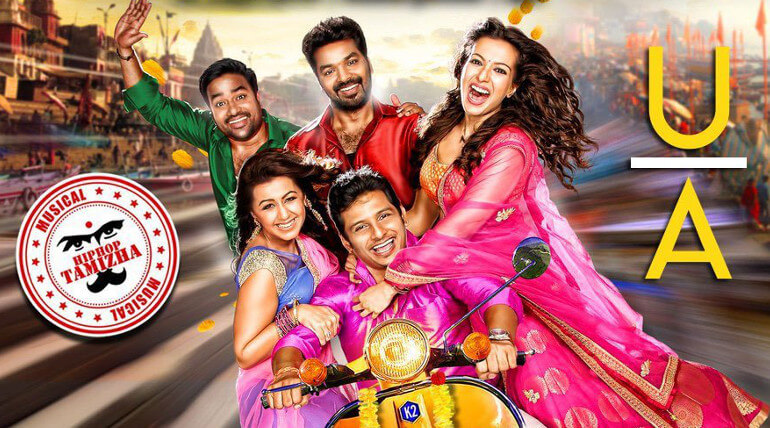 The successful laughing riot Kalakalappu sequel is ready to hit theatres on Feb 9th worldwide by getting censored with U/A without any cuts. The audio tuned by Hiphop Tamizha is on the way. Directed by Sundar C and produced by Khusbhu Sundar under Avni Cinemax, the film features Jiiva, Jai, Shiva, Catherina Tresa and Nikki Galrani in main leads.

The teaser, making video and 2 songs were screened in the press meet. The singles were released in the social media page and earned high responses. The teaser and audio are expected soon at the net. Meanwhile the actress and producer Khushbu shared the release date and audio release of the film on his twitter handle.

Nandita Swetha, Sathish, Robo Shankar, Ramdoss, Rajendran, Vaiyapuri, Manobala, VTV Ganesh, Santhana Bharathi and others are also the part of this fun ride. Musician Hiphop Aadhi had said his favorite songs in this film are 'Krishna Mukundha' and 'Tharumaaru'.

The producer also honored the musicians and singers who worked with Aadhi for this movie. Unlike other albums, Meesaya Murukku audio rights were sold post theatrical release which was unprecedented. Meesaya Murukku is being one of the favorite albums among youngsters and college goers.