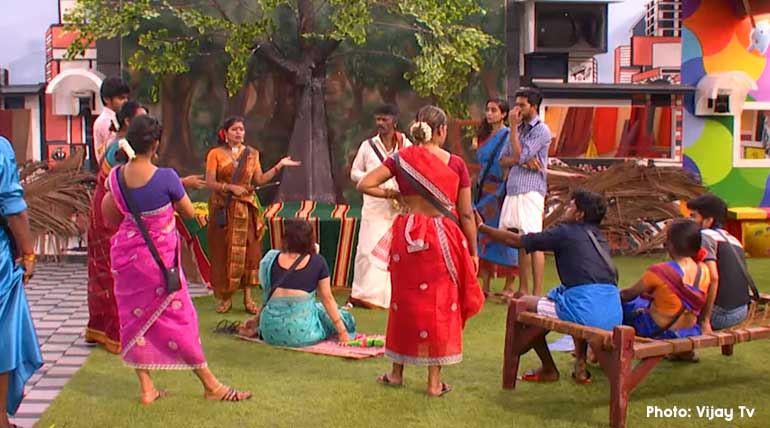 The village task splits the house among noisy and exciting events along with the comedy arguments.  But what big boss expects of the task is well done by Meera of starting more fights for the week among the contestants.

Sakshi wants to be friends with Kavin for the remaining days:

Sandy starts his entertainment first thing in the morning of the 29th day with covering himself and Sherin together with a blanket. Also, the day started with a positive note from Sakshi to Kavin that to start again as friends for whatever days left.

It could be even five or six days. But Sakshi conveys the conversation to Reshma and Madhu while  Kavin conveys it to Sandy. Sherin and Sandy set the stage for today with village songs in the cart.

Sandy also criticizes Madhu for her cleanliness drive.  Also, he cautions she may become the next captain, and only God should save the big boss house.

Cheran starts reading the rules of the next village game and divides the big boss house into two villages, Pambupatti and Keeripatti.  The atrocities of the two villages are too much and will surely find fault with the other village.

The Pambupatti village for their food should ring the bell and take a plate to the Keeripatti people and do the assigned task by them for getting it.

Villagers to make the life of others tough in their given roles:

Cheran is the Nattamai of the Pambupatti, and Madhumathi is the leader of Keeripatti village.  Two issues will be discussed in the village panchayat daily, and two complaints each from either side can be given.

Contestants dressed appropriately in traditional dress as per the village getup are ready for the panchayat.  Madhu being the leader of Keeripatti village is given some instructions.

She gets the power of knowing anyone by face reading. Sherin is given a loving, and obedient wife of Tharshan with Meera has her mother in law, whom she tries to satisfy.

Losliya is confined as the talkative girl of the village and to cause issues in the village.  Meera rightly gets the complaining mother in law character.  Tharshan plays the dual role of Chinrasu as a loving husband and an obedient and mother abiding son to Meera.

Cheran is a food-loving Nattamai and is against the leader Madhumitha. Kavin and Sandy are members who want to become the propaganda secretary of  Varutha Padatha Sangam with Sakshi as its permanent leader. Reshma is a stealing old lady.

Mugen is the husband of Abirami and tiger outside and mouse inside the house.  Saravanan is the village minor to do the atrocities as usual.

Meera starts what Bigg Boss wanted of the task:

What big boss expected of the task started among noisy and exciting events of the village task among the contestants. Meera started trouble in the fun task.

Taking the comments during the task is as per the big boss gives the role.  But Meera wants to personalize it as Cheran saying certain things as planned. Meera even orders to Cheran not to shout.

Irritated Cheran shouts out of control the first time in the bb3 house. Everyone does their role to their best to make the show interesting. Tharshan and Meera perform the roles best among the others, and Tharshan's dialogues are livewires.

Today ends with fights and funny entertainment in the village task and birthday celebrations for the stealing old lady Reshma.  She cries uncontrollably from the greetings of her son.