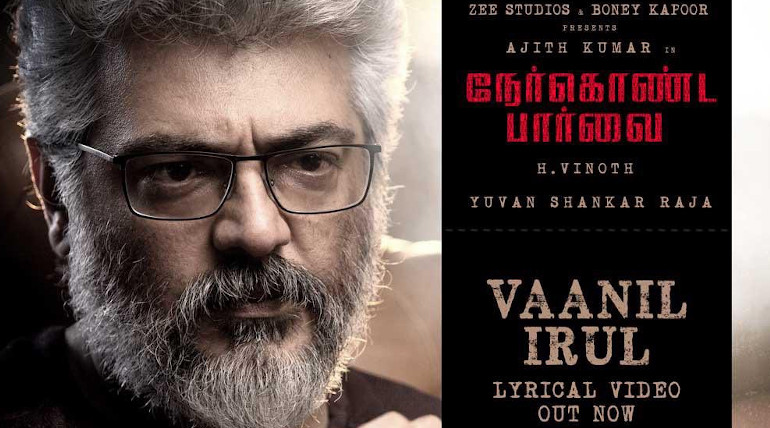 In Nerkonda Paarvai, Ajith is playing Amitabh Bachchan role as a lawyer. Directed by H Vinod of Theeran Adhigaaram Ondru and Sathuranga Vettai fame, Yuvan Shankar Raja had tuned music and Shraddha Srinath of U-Turn and Vikram Vedha fame is doing Taapsee role for this movie.

Rangaraj Pandey, the journalist and anchor had cast role of the lawyer opposite Ajith Kumar. He had changed his look for this movie. The popular actress Vidhya Balan will be seen in Guest appearance as pair of Ajith Kumar. It is being jointly produced by Boney Kapoor and Zee Studios.

In an interview director said Ajith and Rangaraj Pandey hugged when they met during first day of shoot. It is reported Ajith had waited for the project for 2 months due to fixing the casts. The movie shooting was completed on April and it is in post production works. The official trailer was recently released and well received by audience. The single which was released today is receiving positive reviews. Lyricist Uma Devi had penned lyrics and Dhee lent her voice for this song.