Vishal Says Twist Of Tale : Officer claims that he threatened 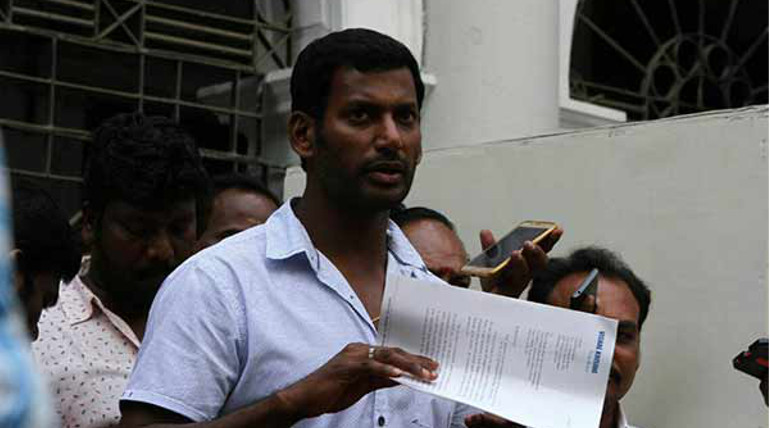 Following the rejection of Vishal's nomination by election commission, the actor took several steps to get into election list. He applied to reconsider his papers but in vain. Election Commission told the officer decision is final and would not be changed.

Vishal tweeted that democracy had been failed and God should save the country from this anarchy. There are several twists he is facing. Yesterday election commission said Vishal has to produce the two candidates within 2 hours whose signature has said to be forged. But Vishal could not find out those people named Dheepan and Sumathi.

He said he could not trace out those persons who signed for him. Moreover he added officer claims that he had threatened them to accept his nomination.

Vishal tweeted "Alarming turn of events ! Just received info thru media that I have to produce the 2 people who supposedly alleged that their signature in my nomination for RK Nagar Election has been forged, in front of the Election Commission before 3 PM today. Less than 2 hours to do this..

As time passes by, Dheepan and Sumathi, who proposed my nomination are not traceable. I'm very much worried about their safety & security.... Whether I Win or Lose, Democracy truly Lost !!"

In his last tweet he said "Twist of Tale.... Now, Returning Officer claims that we threatened him to accept my nomination the other day... What more is to Come ?!"


Vishal Says Twist Of Tale : Officer claims that he threatened