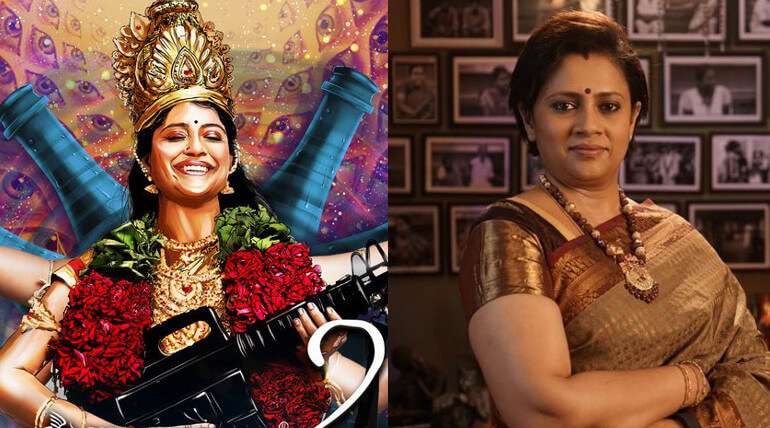 Aruvi, which is receiving rave reviews and overwhelming audience responses is not the exemption without controversies. The movie is facing controversies in the social media pages now. Some people are claiming the movie is copied version of the Egyptian movie Asmaa and some say it is over rated movie."

Meantime the popular reality show 'Solvathallam Unmai' host and actor Lakshmi Ramakrishnan took dig on Aruvi movie as "feminist film made by cheap & personal attacks on another woman! Hello!!! Plagiarism and personal attacks on women are not right!!!".

She also stated "film industry has to be responsible and not get into cheap spoofing and personal attacks for their own benefits/ hidden agendas. Remember we cater to immature people like this one !

"Being a Woman, that too outspoken, in media , successful in some ways and happened to be born in the so called ' brahmin' community, that too having a Palakkad Iyer accent and settled in Tamilnadu is worse than being affected with HIV"

Here are her tweets over Aruvi.


We can't reveal they are HIV positive, in the show, but, we live in a state where some fools think make believe characters in cinema are true!!! So why not show real characters & incidents, which cannot be revealed in show, through cinema?! https://t.co/ZUUVbU9AjU

They don't respect living people and women, why would they respect religious sentiments?!
Making a feminist film by personally attacking another woman is the cheapest and most disappointing part of this film! https://t.co/8ftxB003k0

And the worst part is prominent media people appreciating the film in spite of the gross disrespect and abuse of another woman! https://t.co/8ftxB003k0

Remember #Slumdog ? Based in a popular show? They did not associate or believe that BIg B actually does what is shown in the film to his participants! But fools like this one, believe the Director's imagination is what actually happens! https://t.co/OeMKdwdtZu

If the makers/ director has the b.... let them face me , live on camera, and answer my queries, good opportunity for publicity for the film! Can any of the popular channels including @ZeeTamil , come forward to do this? https://t.co/OeMKdwdtZu

film industry has to be responsible and not get into cheap spoofing and personal attacks for their own benefits/ hidden agendas. Remember we cater to immature people like this one ! https://t.co/OeMKdwdtZu

Very disappointing , is it a stolen idea?!! Sad if it is ðŸ‘ŽðŸ‘ŽðŸ‘ŽðŸ‘Žour talents have to resort to plagiarism and personal attacks & defaming of colleagues for sake of money and fameðŸ˜­ https://t.co/HRMMFZYM6P