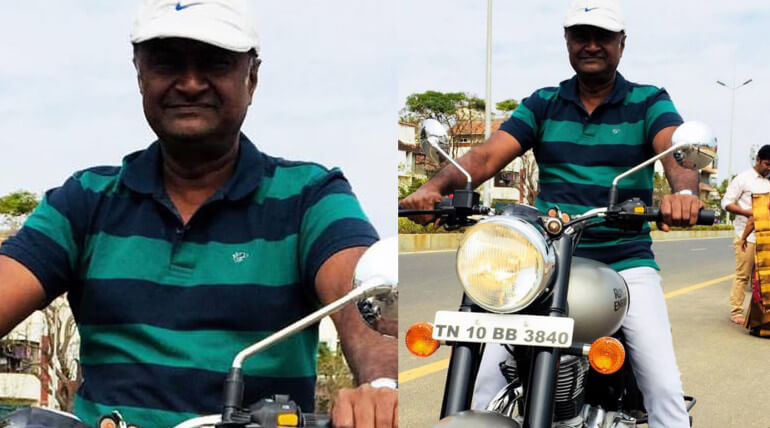 The voice artist Ishwarya Bhaskar gave a surprise gift to her father MS Bhaskar and actor of the Tamil cinema. She fulfils her father's long term dream by this surprise gift. She carried her father to the location of the bike by tying his eyes and gifted Royal Enfield bullet to her father with lots of surprises.

Bhaskar was filled with emotions with his daughter's gift. He hugged and thanked his daughter Aishwarya. Later he drove the bullet and it was enjoyed by his lovable daughter. Aishwarya shared their lovable moment on her social media pages with photo and video.

Bhaskar was a theatre artiste before coming to cinema. He was introduced in Tamil cinema through Thirumathi Oru Vegumathi in 1987. He got break though Vijayakanth featured Engal Anna. His performance was praised in several movies including his recent 8 Thottakal. He had appeared in notable movies like Madrasapattinam, Ko, Deiva Thirumagal, Velayudham, Soodhu Kavvum, 36 Vayadhinile, Demonte Colony, Uttama Villain, Dharma Durai and several others.