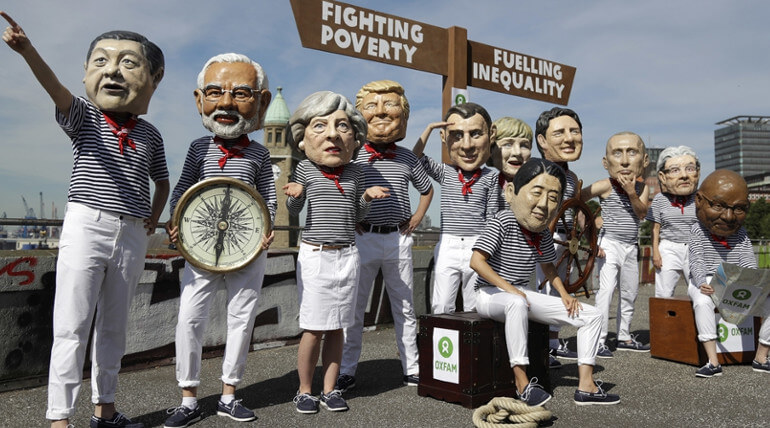 We are still swimming in the inequality whirlpool, where the poor will be sucked in soon and richest will be enjoying the spin. The wealth of all the poor will be grabbed by the rich in an increasing speed without the knowledge of the poor in the means of business. Whether the situation of Inequality known as a business or a theft?

The Oxfam had submitted a document of survey in the World Economic Forms of 2018 at Davos. The survey of Oxfam states that 73% of the India's wealth had been locked in the vaults of 10% richest. The situation of inequality had been increasing rapidly were it was 58% last here had risen in an alarming rate of 73% this year.

The Oxfam had clearly stated that the total budget of Central government in the year of 2017-18 is competing with the wealth of richest 10% people where their wealth is calculated as Rs. 20.9 lakh crores. The Oxfam survey says, hardly it will take 941 years for an averagely paid rural worker to generate the pay scale of an executive working in the top Indian firm. For example, to get a 17.5 days wage of an executive from a top India company, the rural worker should have to work for at least 50 years.

It also says 2017 had given unexpected increase in the wealth of billionaires in a rate of two days once. This crisis will be applicable for all nations that total wealth of 82% of people had been generated to the 1% of richest.

In India, totally 17 billionaires have been added to the list of world richest people of 2017. In also states only four women billionaires from India had made in to the list shows the greater gender inequality of India.

Nisha Agarwal, India's Oxfam CEO said the increasing number in the billionaire list is not the symptom of growing economic system but it is the symptom of falling economic system in the future. The poor people who are working in a factory, a former who grows food for the whole nation are still struggling to pay for their child's education and medical bill. The Oxfam urged the PM of India to make concentration over the unequal economic system that works only for rich.