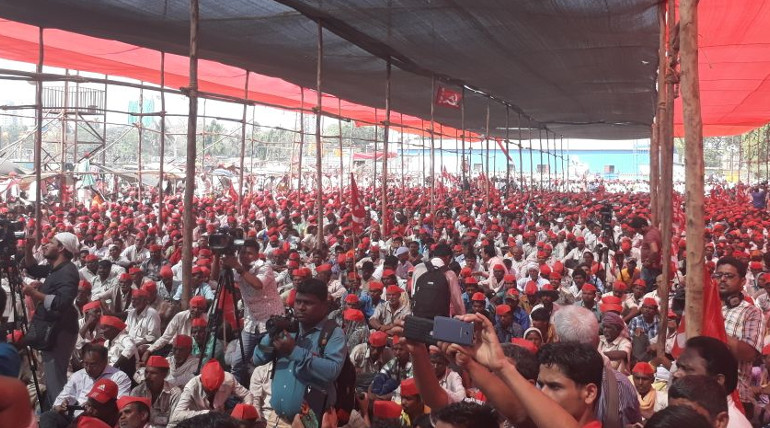 Chief minister Devendra Fadnavis said that he had teamed up with six members to hold the discussion with farmers. Fadnavis said that the government is positive enough to listen to the demands of farmers and ready to solve their issues. He continued that most of the protestors are tribes in the farmers' march, their main demands will be the forest land rights hence the government is looking for the positive resolution of it. The answers of Fadnavis seems everyone in our nation should march for at least 180 km with the barefoot under the heat spitting sun to claim their common rights to get prosper. More than 30,000 farmers across Maharashtra were now camped at Azad Maiden after a long painful march of 180 Kms over the hot road. On March 6 small number of farmers of Maharashtra started their march from Nasik with the red flag of lefts in their hands towards the legislative assembly of Maharashtra. The march was arranged by All India Kisan Seva(AIKS) a leftist affiliated organization with some demands. The main demand was the implementation of complete loan waiver scheme and a fair price for farm products. Some other demands are implementing the recommendations of Swaminathan commission and compensation for the hailstorm affected farmers of Maharashtra.

Other than farmers a large number of tribal community people have also joined their hands in the farmers' march. Apart from tribes and farmers reports confirmed many other social activists were stuck to the march hence the march became one of the biggest farmer protest of the nation in recent time around half a lakh civilians joined the protest within three days of their march towards Mumbai.

The farmers demanded to stop the forceful acquisition of their farmlands for governmental projects. this protest is considered as one of the nation's biggest farmer protest and rally. Some kind of concepts rallying over the twitter like, When farmers entered the city they marched after midnight to avoid the inconvenience of citizens and school students. The farmers are caring for the society and surroundings but when will the government going to do the same for them in return. How could be the government repay their efforts to own their rights back?