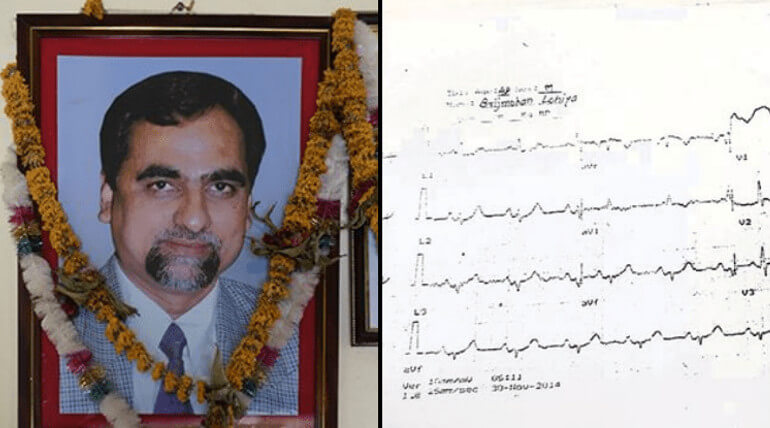 An Indian Journal for politics and culture affairs had obtained some medical documents regarding to the death of special CBI judge BH Loya from Maharashtra court, which was submitted by India's top forensic experts, under the right to information act.

The journal verified the documents with help of Dr. RK Sharma, Former head of Forensic Medicine and Toxicology Department at AIIMS and the president of Indian Association for Medico-Legal Experts. As per the document, Sharma confirmed his opinion that there is no possibility of a cardiac arrest. But the reports, which were submitted in 2015, stated that he had died in a cardiac arrest.

RK Sharma had confirmed to that reputed journal that there is no evidence for a Myocardial infarction according to the Histopathology report.

The cause of the death was "Coronary Artery Insufficiency" according to post-mortem report. But no changes notated in this document are enough for a cardiac arrest according to him. He reasoned, because every person who undergoes the bypass surgery will have these symptoms of ache. But the report stated it as the cause of death.

He continued, the report said about a trauma caused by some kind of physical attack as the Dura is congested. The Dura is a matter which covers our brain from the outer side. Anyhow the reason for the congestion had not been mentioned in the report seems very hard, because it is mandatory to mention. The report state every organ is congested according to this Sharma concluded there are some possibilities of poisoning in Loya's body.

BH Loya is a special CBI judge who heard the encounter case of Sohrabuddin Sheikh on 2005. The case has maintained a high political profile person as primary accused. He was none other than present BJP's National president Amit Shah, who served as Gujarat Home Minister at the time of encounter.

Unusually the case attracted more public attention at the time of hearing and the case extends for judgment in lack of evidences for years. In 2014, BH Loya had passed away in heart attack who under took the case in June 2014. Soon after his dead, Amit Shah had been set freed by the court as the case was politically charged on him.

Judge BH Loya's father and his sister once stated to a daily that they remember blood stains on back of his shirt. Later some judges and lawyers appeared up to show interest on BH Loya's death with Loya's family as they have suspicion in that death. This case still wonders everyone while hearing the details. Whether the judgment given in 2015 to release Amit Shah was a judgment proposed under compulsion?