Justices Of Supreme Court Have Made Historical Press Meet 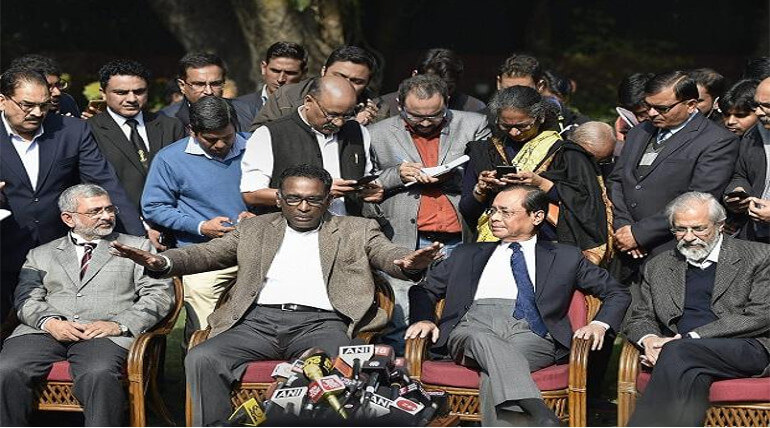 The Justices Of Supreme Court Had Made An Historical Press Meet

Justices of Supreme Court says that the democracy of judicial system is under threat.

Justice Chelameshwar: We left with no choice but talk to the nation directly.

This was one the brave moves of the Justices in Indian history. Today four justices of the Supreme Court have called press for a meeting without disclosing anything about what the meeting was.

They started up on 12:15 pm, the bench was leaded by Justice Chelameshwar and other three justices accompanied him are: Ranjan Gogoi, Madhan B Lokur and Kurian Joesph. Justice Chelameshwar said, there was no pleasure for them in this historic event and they are in the situation to save the democracy of judiciary. He extended they left with no choice that their efforts were failed to convince the chief justice to take steps on protection of judicial freedom.

The Justices had disclosed a letter to the press which was written two months before to the senior judge of the Supreme Court Deepak Mishra. The letter says that Deepak Mishra had taken the sole authority of which case for which judge, that he allegedly prescribed some sensitive cases to some junior judges. Chelameshwar added thar they had conversation with Mishra regarding the content of the letter but the conversation ended in failure, hence they decided to disclose it to public.

He continued, in the meeting they held with the chief justice in the morning they raised a death case of special CBI judge BH Loya, who died of a cardiac arrest while hearing a murder case which was against BJP chief Amit Shah. But the family suspects that he didn't die of cardiac arrest. Including this case many of some sensitive cases were left to buried at the past. The Justices complained that along with Loya's case many sensitive cases were re allocated by Mishra.

They said things are not good with the administration of Supreme Court in the past months and they got responsibility to address the situation to the nation. While asking them they are thinking the chief justice Mishra should be impeached, they said they have no authority let the nation to decide about it.

Soon after the press meet of justices PM Narendra Modi consulted with the law minister and the government's top law officials. But the government side said it was an internal issue of judiciary.

Justices Of Supreme Court Have Made Historical Press Meet