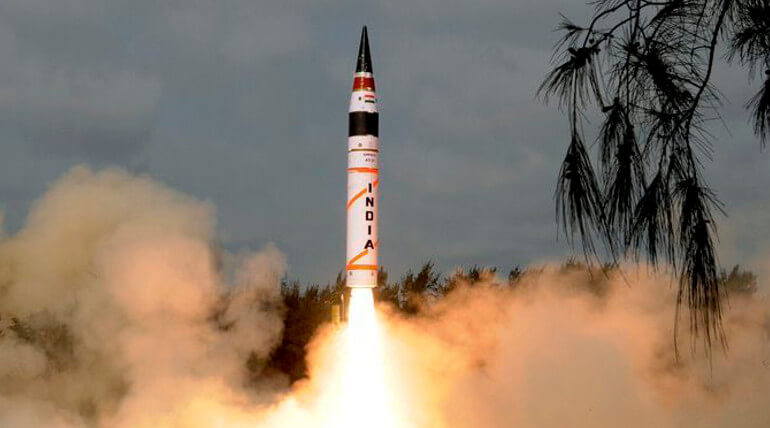 The most crucial missile AGNI V of India had passed in its test fire.

After some successful test fires of Inter Continental Ballistic Missiles Series AGNI, India had entered in to the elite nuclear club of US, Russia, China, France and UK. India had successfully fired up some AGNI ICBM missiles from 2012 they are AGNI I which has its range up to 700 Km, AGNI II firing range is 2,000 Km, AGNI III firing range is 3,000 - 5,000 Km and AGNI IV ranges up to 3,500 - 4,000.

Defense Minister Nirmala Seetharaman had confirmed, today in the AGNI series DRDO has tested up its fifth missile AGNI V made under Integrated Guided Missile Development Program. The missile was a weighted over 50 tonnes, 17 meter long 2 meters wide. It was programmed under surface to surface missile powered with three stage solid propellant.

The missile has the capable range up to 5,500 - 5,800 Kms and it can be extended to 8,000 kms. The missile officially brings Northern most part of China, a part of Africa and Europe into its hitting range. The missile is one of the lethal destroyer weapon made by Indian Defense Research and Organization. The testing was conducted at the test range of Odisha's Abdul Kalam Island.